It's never too late!

Back when I was pregnant and working in the tavern, one of the popular questions I'd get from customers was regarding cloth diapers. Would I use them? I told people that, yes, I thought I would like to use cloth diapers.

The usual response was laughter.

Oh, silly girl. You don't even have running water! Just wait until you actually have a baby. Then we'll see who's using cloth diapers!

Well, one month went by, and those cloth diapers sat, untouched, in the bag I brought them home in. I'd look at them every once in awhile, and talk about them, but I never put them to use. The potty, however, I did make a start with. At every diaper change I'd sit with it held between my thighs, with Aedan held over it, and more often than not, I'd catch a pee. If I was real lucky, I'd catch a poo, too.

Then, life got a little crazy. Dealing with a diagnosis of neo-natal diabetes took center stage. I completely gave up on the potty, and that bag of cloth diapers got moved to the shed, destined for the thrift store. I felt like a bit of a failure. Like all those laughing customers were right. I felt resigned to sending plastic bag upon plastic bag of used disposable diapers to our landfill.

But last week, 5 months in, I made a decision. I rescued those cloth diapers from the thrift store pile and I started using them! And I even bought another 30 second hand on Kijiji. It's a bit of a challenge, not having running water, but not so bad. Some days I wish for a creek or a stream running by the house (but not plumbing. That's kinda weird!) I get by washing diapers twice a week at the moment, one load at the laundromat and one at the CPNP (more on that later). I bring them home and dry them by the woodstove, a sight that makes me immensely happy.


And I've got back in the habit of offering the potty at every diaper change, too! 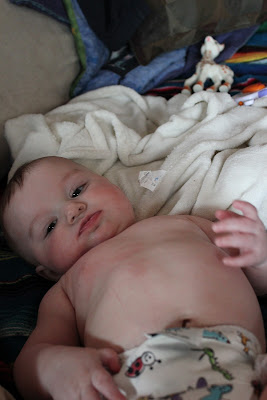 So there, naysayers. Don't tell me I can't do something!

I've been feeling rather blue today, down about a few different things. As I walked along the trail late this morning, Aedan snoring in the carrier on my chest, I was lost in my head, picking over my sadness and holding up the worst bits to the light. My internal monologue was bleak, and I was hardly paying any attention to the forest around me.

Suddenly, I stopped. Before my eyes, a strand of lichen, like long, course black hair, was draped over a low hanging branch. Pendant upon the lichen was a crystal of ice. As I stood staring at the sunlight glinting off the ice, I heard the territorial drumming of a woodpecker echoing through the trees.

I stood, listening for a time, completely pulled out of my melancholy.

The nagging chatter in my head was silent.

The ache in my breast subsided.

I was abruptly brought back into the moment, and reminded that this life can be so simple and so beautiful.

A while back, I wrote about how Aedan's diabetes may be treatable with a pill.

Three weeks ago, we began to gradually transition him from his insulin pump to Glyburide. This week, the fourth week of the transition, he is receiving a full 5 mg dose of the medication, and is actually off the pump for the majority of the day. So amazing! He is still receiving some insulin from the pump in the evenings, because his blood-glucose levels tend to be higher then.

It's been kind of scary for me, taking him off the insulin pump. We'd gotten used to it so fast. It is such a cool piece of technology, and I can see how it must be life changing for many diabetics. Now, I have to learn to trust his body again, trust that it will know when to release insulin and in what dosage. It won't be me making those decisions for him anymore!

We're still seeing low blood sugar readings, even now that he's off the pump most of the time. One of the side effects of Glyburide is hypoglycemia. It seems to happen within two hours of taking the meds...or if he's been particularly active, like playing in the Jolly Jumper. I'm still struggling with feelings of anger and loss over this. I can't just watch him jump and giggle and fully enjoy the moment...now I'm plagued with questions and doubt. Did I feed him enough before putting him in the jumper? Has he been in there too long? Is his blood sugar getting low?

My hope is that, with time (both for me to adjust to having a diabetic child, and for his body to adjust to the new medicine), this will fade and I can focus more completely on enjoying his baby-hood. 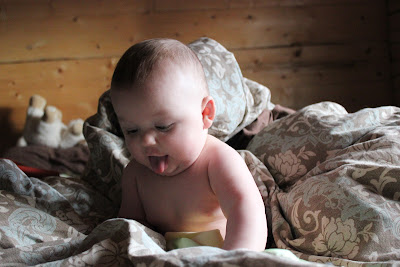 Wednesday evening, a warm south wind began to blow. The trees swayed, black against the darkening sky, and the snow flew off in heavy clumps. The warm wind blew through the night, and by Thursday morning, the thermometer on our porch read -2 C.

At dawn, I put on a few light layers, bundled Aedan into his parka and slipped him into the Ergo carrier, strapped on my snow shoes and took out through the woods with the dogs. It was a beautiful morning, and the sky was mostly clear. Breathing in the moist air, I could almost let myself believe that this was the beginning of the end of winter.

But alas, I know it is not. 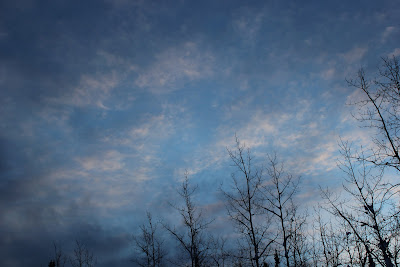 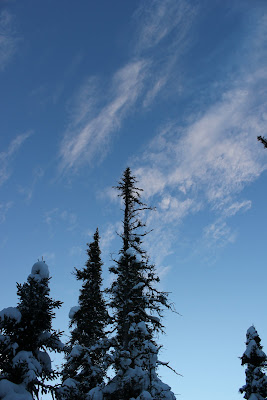 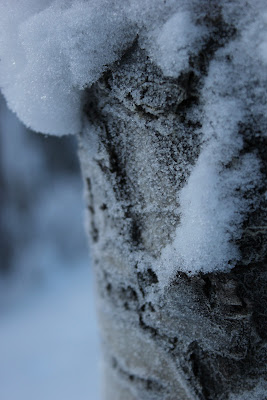 It's still warm today, though, -1 C by our thermometer. Vehicles start without being plugged in. The house is so warm I'm wearing a t-shirt without a sweater. I don't dread a trip to the outhouse. I feel so spoiled!

It's supposed to remain mild for another 4 or 5 days anyway, so I'll enjoy it while it lasts!

(and I promise soon to post about something other than the weather!)

Posted by Tara Borin at 7:23 AM No comments: