Nights with two nurslings are not always full of Mama-sleep. Sometimes, mama gets tag-teamed by two very inconsiderate little boys.

Last night was one of those nights.

I'm not sure what time it was. It was certainly the very earliest hours of this day. Colm began waking to nurse, and not long after I got him latched, I could hear Aedan begin to stir. Still half asleep, he pressed into my back, searching beneath my shirt for a boob (if only I had one back there!) "Mama," his little voice called out, "nurse?"

"As soon as Colm finishes, I'll nurse you, sweetie." I reached back and patted his bum, silently willing him to just fall back to sleep, as he sometimes does.

This wasn't one of those times.

He started to cry.

He thrashed the bedding around.

All the while, I kept my cool, and P did the same. I nursed Colm back to sleep, calmly reassuring Aedan that I would nurse him just as soon as I was able. Finally, I rolled away from Colm, and attempted to settle Aedan on his twin mattress next to ours.

This was my mistake.

Rolling away from Colm gave us all about 5 minutes of peace before he noticed my absence and began to fuss.

He wasn't buying it. I rolled back to resettle Colm and the kicking and screaming began again.

I suppose, eventually, I fell asleep, because I was definitely out the next time Colm tried, unsuccessfully, to latch--his nose was full of snot. And then Aedan chimed in: "nurse?" And then "want it wake up?" I dragged them both downstairs only to discover that it was but twenty after four in the a.m.

I cleared out Colm's nose, got everyone back in bed, and nursed them simultaneously back to sleep. I don't like doing that, but I needed sleep.

Oh, except Aedan didn't immediately fall asleep. When he finally did, and I began drifting off, Colm woke up.

I had to laugh, because, really, what else is there to do?

This past week we made our way to Vancouver for Aedan's regular 6-month check in with the diabetes clinic. He is doing really well; his A1C came back at 5.2, which means he continues to be in a non-diabetic range. They weighed him, too...he weighs about 30 lbs now! What happened to my little baby?

The trip itself was not much fun. Travelling with two little ones is not my idea of fun. After a few rather unsuccessful attempts to eat in restaurants, we resorted to "hotel picnics". I really wanted to take Aedan to the aquarium, but it didn't happen. We managed to get him to the park,but that was it.

Vancouver was beautiful, as usual. And it hit -44 C here on the Dempster while we were gone. I am so glad we missed that!

On  our way back through Whitehorse, we saw our midwife for Colm's 6 week check-up. He is also doing really well! He weighs 11 lbs 2 ozs now. Christina was really impressed  with how he's developing: he's smiling, cooing, and very alert.

I don't have any pictures from Vancouver, because I wasn't having any fun!
Posted by Tara Borin at 12:29 PM 1 comment:

Today began in darkness, as every day does. We sat in our usual places in the living room, and we poured out our misery like the morning coffee. "I'm not having any fun."  "I feel so overwhelmed."  "I wish we were somewhere else."

And then, as the sun rose, the bad moods lifted. It's amazing how the simple act of giving voice to our unhappiness can dispel it. 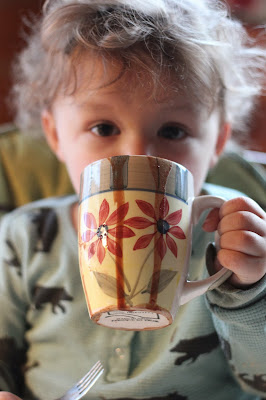 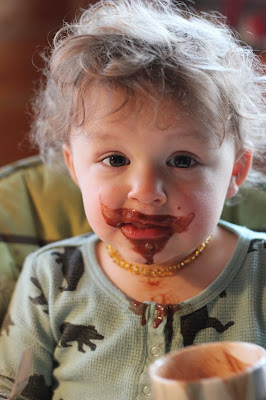 I got a pot of roasted butternut squash soup simmering on the stove. I managed to get myself and the little ones outside for a half hour, and then back in for hot chocolate and lunch. Then it was nap time and a good phone call to my mom. P got home from doing some work in the office, and we all went outside again, this time to burn some brush. 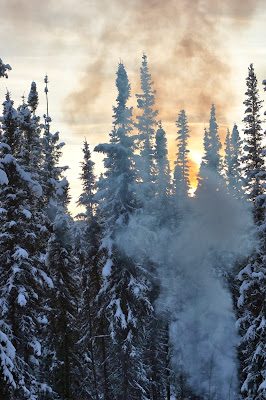 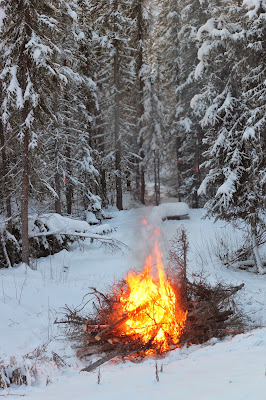 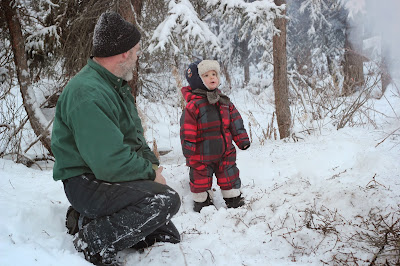 We had the soup for dinner, and then the boys each had a bath, with only minimal crying from Aedan. He went to sleep easily, as he has been lately, and Colm is asleep now in my lap as I type this. The candles have all burned down, there is jazz and Tim Tam on the CBC. I'll tuck this day away in my back pocket, and remember it on a day that doesn't feel so smooth and rhythmic....

But I hope they become more like this!
Posted by Tara Borin at 9:13 PM 2 comments: 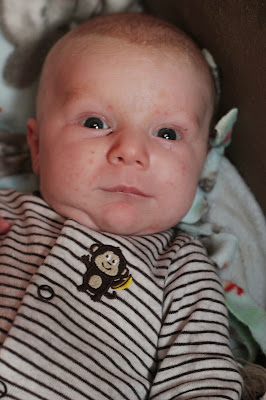 Has it been a month already? It feels like we've been at this forever!

I try so hard to mark the changes that take place in you each day, but I must admit, it is so incredibly difficult with a 2-year old being..well...being a 2-year old all over the place.

Colm, you take it all fairly well. Often I think you look a bit bewildered at all the action. I wonder if your brother, bouncing all over the couch and throwing plastic sea creatures around and kissing you and patting you and scratching your face offends your delicate senses. Sometimes, when I look at you, I am sure you are an old soul--you seem so much older than your older brother. Do you wonder into what chaos you've been born? I promise you it won't always be this way. Or maybe it will.

Your eyes are quite blue, and you've got a sweet little smile developing. Your hair seems to be fair. You look like your daddy. When I hold you to my shoulder, your strong feet push against my hand as you peek around behind me, holding your head up a few seconds at a time. You love to be held, all of the time. You don't like the car seat, and you cry as soon as the truck stops rolling. You are not terribly patient, but then again, neither am I these days, so I can't blame you.

You are a sweetheart and I love you more each day.
Posted by Tara Borin at 2:20 PM 1 comment:

These days, I feel like we're starting to hit our stride.

Or at least, I don't feel like we're stumbling on a daily basis. 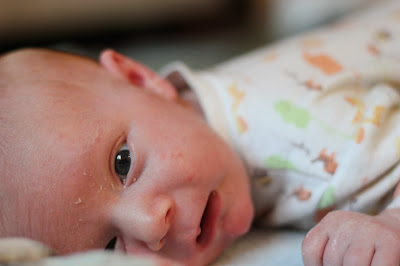 Our days are taking shape. We are finding a new rhythm. We begin in darkness, somewhere between 5:30 and 6 am. The grown-ups have coffee and tea, the littles have mama's milk and snuggles. Aedan plays some games on the iPad, or watches a video of humpback whales or diggers (depending on his mood). P makes us breakfast and does the dishes, and then he gets to work on plumbing or dog walking or wood cutting while I nurse babies, do puzzles, read books, play sea creatures or trucks or blocks. At some point, there is a bit of a struggle over nursing, but I try to set some limits with Aedan for my own sanity. I've also been trying to get Aedan into some undirected "arting". We've tried finger painting, play dough and stickers. He does not like sticky things on his fingers. It really puts a damper on most of the fun things for toddlers to do. 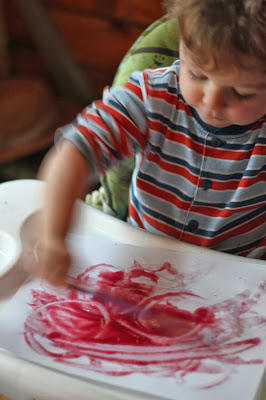 Today, I got him painting with a toothbrush for a few minutes. 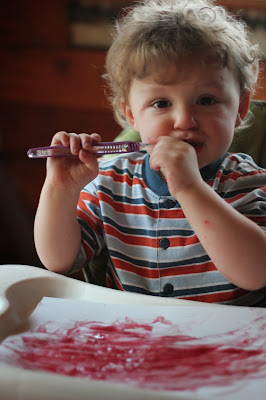 He kept trying to brush his teeth with the paint. (Don't worry, it's made of powdered beets and water).

Aedan naps in the early afternoon, sometimes for three hours. I try really hard to nap, too, but I've never been a good napper. Instead, I read or surf the net (come 4 pm, though, I really regret that decision). When Aedan wakes up, I try to get us all outside for awhile, but lately he's been fighting me on that one. I'm usually too tired to press the issue, but if P is home I'll take the extra help to get us all out the door for an hour or so. I need it as much as Aedan does! Dinner has been uneventful. It's food in our bellies. I miss cooking. Bedtime is around 8, because I usually can't keep my eyes open any more. The nights are going okay, Colm doesn't wake often but you can bet that when he does, Aedan does, too. So I'm doing double duty at night, too. I really hated that in the beginning, but it's getting better. 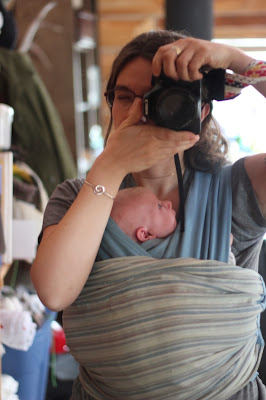 The days sort of blend together. They are at once eventful and incredibly boring. Some days I want so much more. Or I want an hour of not being touched by little hands. But these things aren't possible right now, so instead, when it gets to be too much, I let myself think of the future, when my two boys are playing together happily and I am sitting on the couch knitting or in a room of my own studying some distance course or writing.